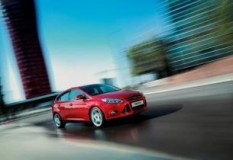 What Car? have just published their UK road test of the Focus 1.0 EcoBoost and awarded it a fantastic 5* rating!

The 2012 Ford Focus has been given a revolutionary new petrol engine. Revolutionary because of the numbers involved – just 1.0 litre and three cylinders, 56.5mpg and 114g/km of CO2.

Not only is the Focus Ecoboost engine small and economical, but a turbocharger means it’s no underpowered eco-special. We tested the 123bhp version, although there’s also a 99bhp variant that manages 58.9mpg and 109g/km.
Expect to see a lot more of this 1.0 Ecoboost engine, too. It’ll go into the C-Max and Grand C-Max MPVs later this year, along with the B-Max that’s due in September. It’s a safe bet that it’ll also appear in the face-lifted Fiesta in the autumn and the new Mondeo in spring 2013.

Should I buy one?

Yes. If you want a small family car that’s fun to drive and cheap to run, this 1.0 Ecoboost is ideal. It’s economical, refined, brisk, smooth and, thanks to the low CO2 emissions, cheap to tax as a private or company car.

Full details of the article can be found at whatcar.com.

This morning ForeFront Training carried out defibrillator training with 7 of our team. Having invested in this lifesaving piece of equipment, we thought it was vital to have staff trained in operating it confidently should the need ever arise (we firmly hope it doesn't!!). ... See MoreSee Less

@SarahAnn0001 @PaulWoodford84 @forduk Hi Sarah Ann , can we be of any assistance to you , if you would care to give… https://t.co/JYrNTr7qJF